Established in May 1999 by founder and director Laura Hassler, and registered as a charitable foundation in 2000, Musicians Without Borders is the world’s pioneer in using music for peacebuilding and social change.

Laura mobilized her network of socially conscious musicians to create an organization dedicated to using music to bridge divides, connect communities and heal the wounds of war. The organization’s first long term project, the Music Bus, brought music, dance and theater to children in Srebrenica and its neighboring towns and refugee camps.

Following the success of the Music Bus, Musicians Without Borders was invited to conferences and cultural events in Kosovo and in Palestine, which would later lead to two of its founding programs, the Mitrovica Rock School and Palestine Community Music. In the years that followed, Musicians Without Borders expanded to include programs in Central Eastern Africa, Central America and Europe.

Today, Musicians Without Borders engages with artists, social activists and communities worldwide. We share expertise as we work to enable musicians to be advocates, activists, teachers, and performers, with the message: War Divides, Music Connects.

The International Council for Traditional Music is a scholarly organization which aims to further the study, practice, documentation, preservation, and dissemination of traditional music and dance of all countries. To these ends the Council organizes World Conferences, Symposia, Colloquia, and Fora, and publishes the Yearbook for Traditional Music and the online Bulletin of the ICTM.

As a non-governmental organization in formal consultative relations with UNESCO and by means of its wide international representation and the activities of its Study Groups, the International Council for Traditional Music acts as a bond among peoples of different cultures and thus contributes to the peace of humankind.

In Place of War is a global organisation that uses creativity in places of conflict as a tool for positive change.

We enable grassroots change-makers in music, theatre and across the arts to transform a culture of violence and suffering into hope, opportunity and freedom.

An £800,000 award from the Arts and Humanities Research Council to the Institute is funding a unique project: The role of sound, narrative, music-making and digital media in conflict transformation.

The research, led by Professor Fiona Magowan, School of History, Anthropology, Philosophy and Politics, is being conducted in the Middle East, Brazil and Northern Ireland. She says, “As a musician and an anthropologist, I’m passionate about the significance of music in social life. I carried out research in North East Arnhem Land, in a small island community called Galiwin’ku, with Yolngu people who express their connections to land in ritual performance. I wanted to understand women’s songs and their relationship to men’s song performance, since beliefs, emotions and cultural rights are vested in their ritual language of the environment.”

Fiona says, “The art of peace-building is the art of compassion and performance enables that compassion to be manifest. I will be looking at Musicians Without Borders, an international organisation with training programmes based in Derry, who are using music to bring together those affected by conflict. We’ll be exploring how the use of music can impact upon and potentially transform lives, as well as open up new spaces of engagement to alleviate trauma.”

Material collected throughout the project will contribute to a final sound-art installation and exhibition to be showcased in Derry and Rio de Janeiro.

Fiona says, “We will analyse the complexities of how music makes transformations possible and what is realised and experienced in these engagements. What kinds of processes are involved? To what extent are societies being transformed and how?”

“We see ourselves as a Global Family - a dynamic team of motivated individuals passionate about encouraging positive social change and empowering people to celebrate diversity through art, music and dance.”

Since 2004 Beyond Skin has provided global education using artistic methods for local councils, education boards, schools, community groups, businesses and social enterprises. During this time Beyond Skin has gathered a well-respected track record within the communities of Northern Ireland and worldwide, nurturing skills and impacting greatly on community development and the arts sector. 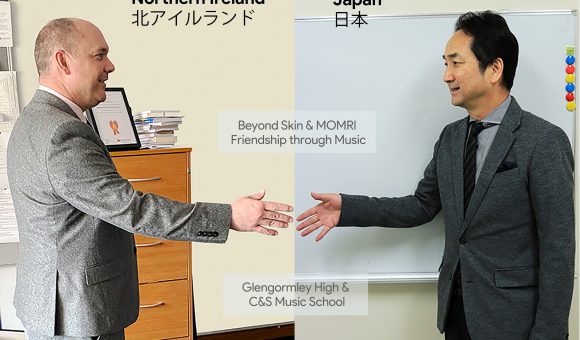 The Beyond Skin Japan page

In February 2020 the friendship through music programme Japan – Northern Ireland began. There are many collaborative elements and a very ambitious vision.  The lead partners are Min-On 民主音楽協会-民音 & Research Institute Japan and Beyond Skin. The partnership is a legacy outcome from Anne O’Donoghue Arts Council of Northern Ireland award. Anne […]